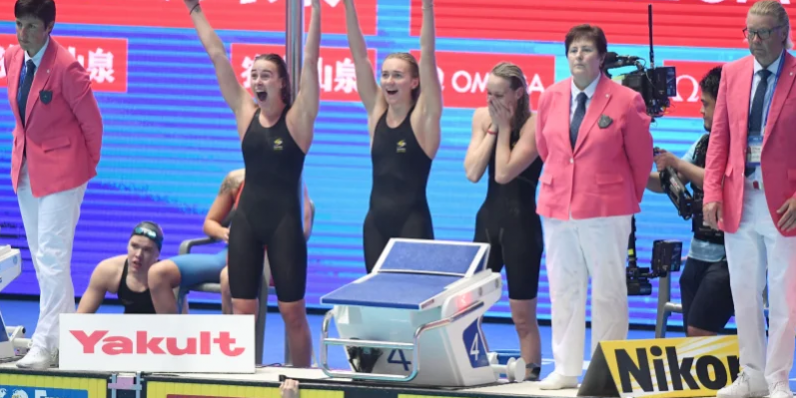 Gwangju, South Korea: An American 4x200m relay squad bolstered by the return of Katie Ledecky broke a decade old world record set by a Chinese team of the supersuit era.

But an Australian team with teenage star Ariarne Titmus at the vanguard set a better one.

Thursday night at the world championships saw a fourth gold medal for Australia’s Dolphins, a pair of world records (breaststroker Matt Wilson collected the other), and a heart-stopping relay final that would prove to be one of the races of an already unforgettable meet.

After qualifying fastest for the final, the Australian quartet of Titmus, Madi Wilson, Brianna Throssell and Emma McKeon had to withstand a spirited assault from a US team of Simone Manuel, Ledecky, Melanie Margalis and Katie McLoughlin.

McKeon would see them home with the bravest of anchor legs. Like Ledecky, she was recovering from illness but somehow found enough to drive them to the line in 7:41.50s, beating the 2009 Chinese mark of 7:42.08, which was set at the infamous supersuit world titles in Rome that sent records tumbling across the board.

With Ledecky roaring back into form, the Americans too were under the old mark, being just 0.37s behind the Australians and ensuring the two nations reunited for a huge clash in Tokyo in 12 months.

Titmus lead off with a thumping 1:54.27s PB split to hand over to Wilson with clear water but Ledecky, who skipped the 1500m final and 200m freestyle individual event, closed the gap and took over going into the second change.

Throssell and Margalis locked horns in a draining battle with the American, handing McLaughlin a 0.09s lead as McKeon took to the water.

Like Ledecky, McKeon missed the individual 200m through illness but would not give it away, edging clear in the final metres. She had her head down and looked up to a trio of jubilant teammates.

“Just touching the wall and seeing the three others celebrate, it made me so excited,” McKeon said. “I wasn’t thinking about a world record, that was the key. Was it a 2009 record? To break that this year is so exciting.

“I was hurting a lot but when it comes to a relay you really give it you all.”

Titmus took silver in the 200m and was desperate to swim faster in the relay environment. She ended up having the fastest split in the race – as a lead-off swimmer – and paid tribute to McKeon, who has been one of Australia’s toughest swimmers of the past decade.

“I really wanted to do my job for the girls. If we really wanted to have a crack at the world record, I would have to play my part,” Titmus said. “[Emma was] so gutsy… to come up and do that. To be able to pull that out in the relay is just incredible. I’m so proud of her.”

Throssell gave up her spot in the 200m butterfly semi-final to swim in the relay and it paid dividends, with the Perth native saying it was the highlight of her career.

“Absolutely, that was probably the best moment in history and probably will be for a very long time,” Throssell said.

It was a special moment for Wilson as well, who was a career backstroker before focusing on freestyle. Now she is part of a world championship team and wants to fight for her spot in Tokyo in 2020.

“It’s undescribable, really,” Wilson said. “Watching Emma come into the wall, I was just screaming with all my energy that I had left. Nothing describes the moment when Em touched the wall.”

Ledecky was upset by Titmus on night one and has struggled with illness, only shedding some details on her ordeal after the race.

“We don’t know exactly what caused this but just feeling the effects of dehydration, loss of appetite, light headedness, just a lot of different things to be honest and it just kind of created a perfect storm,” Ledecky said. “I wouldn’t have ruled out if it wasn’t serious.”

Earlier in the night, Kyle Chalmers took silver in an epic showdown with Caeleb Dressel in the 100m freestyle final and Wilson set up a big night on Friday with an unexpected world record of 2:06.67 in the 200m breastroke semi-final, which equalled the current mark set by Japan’s Ippei Watanabe.

“I was just trying to get my hand on the wall and get in the final. Anything after that was a bonus. I mean a world record is a pretty big bonus,” Wilson said.

Cate Campbell will also race on Friday night after she locked down the second fastest spot in the final of the women’s 100m freestyle.