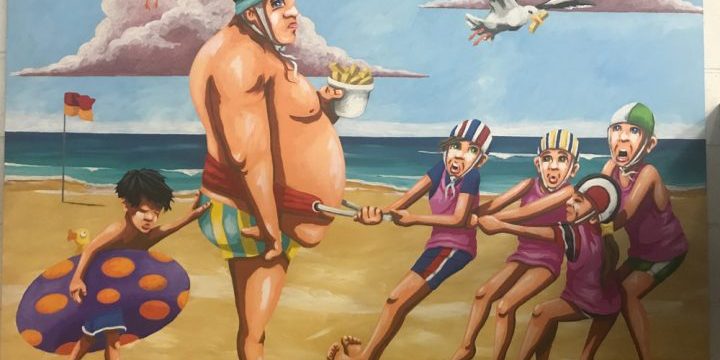 From The Swim For Your Life Art Series

This painting for me symbolizes the Aussie Sunday. Mum’s and Dad’s leading their charges to the beaches, through the sand, over the dunes, and into a usually rough surf and burning sand.

When I was a kid there was not the opportunity for being involved in Nippers. You joined the Surf Club at 14 years old when you could get your Bronze Medallion. I may have mentioned before that I am a farmer’s daughter and therefore we lived 1 hour  from the beach at this time.

With surf patrols starting at 8am I don’t know how my parents worked “farmers hours” all week, and  had us up with the birds to get 4 children to the beach. To me it showed great commitment. It also demonstrated the importance they placed on this amazing voluntary organisation.

I excelled in this environment as a young girl with some talent in the water and loads of energy. I’d like to think that in some small way, the women I joined the Surf Club with back in 1984 when girls were allowed to compete, helped pave the way for what we now call Iron Women competitions. In my day, you competed against the boys in the Iron Man if you wanted to have a go. I always had a go! 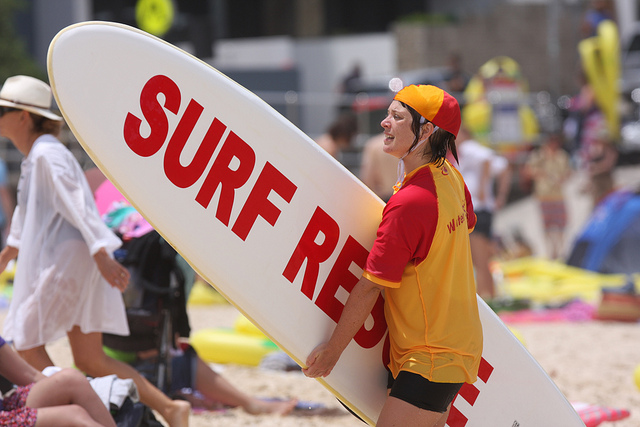 I did become the Nipper Mum when our son turned 8. Not the organiser of the age group but due to my love of the water I was one of the Water Safety people which was great. Floating around in the ocean waiting for the kids to wade and swim around us was great fun and rewarding.

I also remember hours spent holding small children on small light weight malibou surf boards, pushing them through the break and then trying to help get them onto a good wave back to shore. Most times they came unstuck but every now and then they would manage to hold on and make it to shore.

The delight in their eyes at that moment was priceless. Unfortunately our son’s career as an Iron Man lasted 2 summers and at the old age of 10, decided it wasn’t for him. He started tennis!

I have missed the Surf Life Saving Club and would suggest that not continuing would be one of my big regrets. I would definitely encourage teenagers to join Surf Club’s as it is such a healthy and sometimes physically demanding pursuit that it can keep them too tired for anything else!